The title of Sarah Lowndes’s new collection of essays, All Art is Political refers to George Orwell’s insistence that ‘In our age there is no such thing as ‘keeping out of politics’. All issues are political issues…’ Orwell exhorted people to become more conscious of the way in which they used words, explaining, ‘the slovenliness of our language makes it easier for us to have foolish thoughts. The point is the process is reversible.’  Culture, when understood in this way, can be a conscious means of expression rather than a technique for concealing or preventing thought: ‘an instrument which we shape for our own purposes.’ 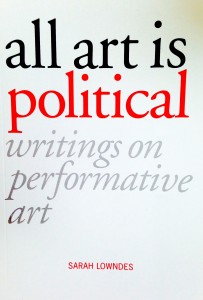 Since the 1990s, performative art has been increasingly accepted into the cultural mainstream, becoming a familiar and popular feature of art galleries and museums, as shown by the Tate Modern’s recent Collecting the Performative project. As art historian Roselee Goldberg notes, The term performative, used to describe the unmediated engagement of viewer and performer in art, has also crossed over into architecture, semiotics, anthropology and gender studies. But what is performative art? What about its radical origins? How does it remain politically engaged? Writer, curator and lecturer at the Glasgow School of Art, Sarah Lowndes takes us through the world of performative art, using five case studies spanning from the 1960s to the present day. A series of essays and conversations, All Art is Political explores the work of artist-musicians Mayo Thompson and Keith Rowe, Berlin-based artist Thea Djordjadze, Glasgow-based Turner Prize winner Richard Wright, American conceptual artist Susan Hiller and German-Swiss artist and writer Dieter Roth.

by admin Posted on May 9, 2014
This entry was posted in Essays. Bookmark the permalink.