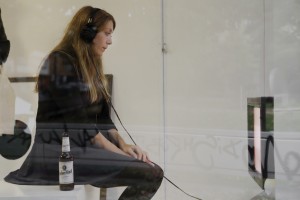 A modest group exhibition of easily transportable works by ten artists from Glasgow, which took its title from Marcel Duchamp’s portable miniature monograph Boîte-en-valise or box in a suitcase (1935-1940), presented in the glass Pavilion of the Volksbühne.

Raydale Dower is an artist and musician, known both for his work with Glasgow bands Uncle John and Whitelock and Tut Vu Vu and for his sculptural interventions and projects. www.raydaledower.com

Andrew Kerr makes semi-abstract acrylic paintings and sculptures that are delicate, evocative and modest in scale.

Optimo (Espacio) was a legendary nightclub run by JD Twitch (Keith McIvor) and JG Wilkes (Jonnie Wilkes) at the Sub Club in Glasgow’s Jamaica Street every Sunday night from 1997 until 2010. Twitch and Wilkes continue to tour, promote and release music as Optimo. www.optimo.co.uk

Hayley Tompkins makes works that bridge the gap between painting and sculpture, which she calls ‘objects’, employing materials such as coloured pencil, watercolour and acrylic paint on newsprint and foolscap, and found objects such as plastic trays or mobile phones.

Tom Varley makes works which explore the relationship between abstraction and language. His film Violence. Silence. is influenced by constrained writing techniques, and playfully explores the associative and poetic possibilities of language.

Richard Wright is best known for making site-specific wall drawings, which are usually painted over at the conclusion of each exhibition, but his oeuvre includes a wide range of works made on paper, from prints on poster paper to complex large-scale works and smaller scale watercolours and collages.

Richard Wright, No title (2013), watercolour and collage on paper.

Richard Wright, No title (2013), watercolour and collage on paper.

Gregor Wright, Phone Call From Nowhere (2012), oil on canvas board.

Supported by: Collective Gallery, The Elephant Trust and Glasgow Life.

by admin Posted on May 8, 2014
This entry was posted in Curatorial Projects. Bookmark the permalink.